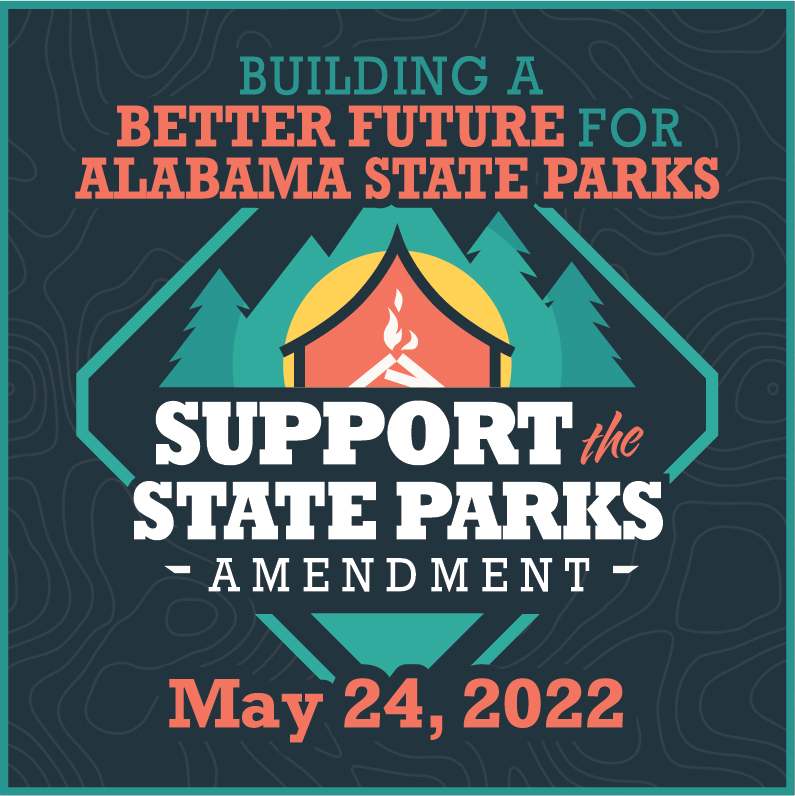 On May 24 Alabama residents will vote in the primary elections. The only constitutional amendment on the ballot will support state parks, and if approved by those who vote in the upcoming primary, will provide a much-needed capital infusion to our Alabama State Parks System. the State Parks Amendment would authorize the issuance and sale of general obligation bonds of the State of Alabama of up to $85,000,000 to provide a wide array of improvements, renovations, construction, maintenance, additions, expansions and much more at many of our state parks. Please consider voting YES for Amendment 1 on May 24th.

Below you will find a few questions and answers to clarify what the amendment will do for Alabama State Parks:

Q: How does the ballot language read for the amendment?
A: The ballot reads as follows “Proposing an amendment to the Constitution of Alabama 1901, authorizing the issuance and sale of general obligation bonds of the State of Alabama of up to $85,000,000 for the purposes of the improvements, renovation, equipping, acquisition, provision, construction, and maintenance of Alabama state parks under the jurisdiction of the Department of Conservation and Natural Resources, public historical sites and public historical parks under the jurisdiction of the Alabama Historical Commission. (Proposed by Act 2021-326).”

Q: Where does the money come from to fund the bond?
A: Government’s issue municipal bonds, which essentially allow the money to be borrowed and repaid, plus interest, over a set period of time. In this case, the $85 million in bonds must be repaid over a 20-year period.

Q: Why is this money needed?
The monies generated by State Parks are reinvested into the parks, but it’s time to modernize and enhance the State Parks system, which draws tens of thousands of tourists to the state every year and serves as a playground and refuge to thousands of Alabamians.

Q: What are some examples of ASP renovation projects that would be funded if the Parks Amendment is approved by voters?
A: Several campgrounds are in need of major renovations to campsite pads, electrical services being upgraded to 50 amp service, as well as water and sewer hookups. Provisions for WIFI are also needed in many campgrounds. Cabins will also be built at state parks to allow for more guests that don’t have RVs.

Q: What are some examples of new features or amenities that would improve ASP if the Parks Amendment is approved by voters?
A: Many old playgrounds need total replacement with new modern playgrounds. Camper cabins have become very popular in recent years. Adding new camper cabins to campground sites, or as separate cabin areas is a likely new amenity. Adding an entirely new campground or additional new campsites might also be an option for highly used/high occupancy parks.

Q: What are some examples of new or renovated day use amenities that would take place at ASP parks if the Parks Amendment is approved by voters?
A: Parks like Rickwood Caverns need a total renovation of their swimming pool. Other parks or campgrounds would like to add a swimming pool as a new amenity. New bathrooms are needed at several parks and day use areas.

Q: Are there any park amenities that were recently damaged and remain unrepaired that would benefit from the Parks Amendment being approved by voters?
A: The day use area and campground Loop A at Joe Wheeler State Park remain in need of funding for repairs/renovations. Additionally, Hurricane Sally severely damaged the cabins and pier at Gulf State Park. Those projects would also benefit from the passage of the Parks Amendment.

Q: Are there any ASP locations that might see a major “makeover” if the Parks Amendment is approved by voters?
A: Yes, several small parks like Lake Lurleen and Rickwood Caverns that didn’t see any previous renovation funds might experience very significant improvements in their campgrounds and day use areas.

Q: Does the ASP intend to build any new lodges with this funding if the Parks Amendment is approved by voters?
A: No. New lodges are not intended through this funding. However, old lodges like the hotel at Cheaha might benefit from major renovations. DeSoto, Joe Wheeler and Lakepoint could all benefit from new equipping, provisions, and major maintenance actions.

Q: Does the ASP intend to leverage these funds with additional funding like state and federal grants, local government partnering, or corporate and private philanthropy through the Alabama State Parks Foundation if the Parks Amendment is approved by voters?
A: Yes, if the Parks Amendment is approved by voters these funds could be used for the purposes of the improvements, renovation, equipping, acquisition, provision, construction, and maintenance of Alabama State Parks as matching funds for state or federal grant funds, cover expenses not otherwise eligible under grants, or to otherwise expand on the options for future projects otherwise funded.

Q: What is different between this and the Parks Amendment that was passed in 2016?
A: In 2016, voters approved a constitutional amendment – on the ballot as Amendment 2 – that prevented park revenues from being siphoned off to support other needs in state government. In essence, it meant all revenues generated by State Parks stays in the State Parks. Before voters approved this amendment, state government could transfer park profits to fill other state needs.

Since voters approved the 2016 amendment, State Parks officials have worked hard to keep all parks profitable and invested those profits back into the parks to fund maintenance, as well as adding amenities when possible.

But the truth is there are so many needs for our parks. This $85 million bond issue will allow the State Parks system to address maintenance needs or upgrade and enhance the parks more quickly and prevent problems from festering and becoming more costly.

Q: Why is public money needed to upgrade parks if they are managed by private vendors?
A: The State Parks system is not managed by private vendors. The Alabama State Parks is a division of the Alabama Department of Conservation and Natural Resources and maintains 21 state parks encompassing nearly 50,000 acres of land and water in Alabama. These parks rely on visitor fees and the support of other partners like local communities to fund most of their operations.

As part of the 2016 amendment, State Parks also have the flexibility to partner with businesses to develop and/or maintain attractions at the parks. One good example is the zip-lining courses available at Lake Guntersville and several other state parks. Those private vendors assist State Parks achieve the goal of making every park a first-class experience for every guest.