The “City in a Forest” is about to open its first mountain bike trail system within city limits.
It’s impossible to miss Atlanta’s lush tree canopy. Aptly nicknamed the “City in a Forest,” more than 50 species of trees grow in the metro area, covering almost half of Atlanta in an urban tree canopy. Some of those trees are hundreds of years old. A surprising number of old-growth oak stands still exist in the metro area, although the city has been growing exponentially both in sprawl and in population. In 2017, 14 tracts of old-growth forests in Atlanta were inducted into the Old-Growth Forest Network.Atlanta’s trees are undoubtedly beloved, and soon, residents will get to rip beneath that storied canopy on the city’s very first urban mountain bike trail system. But according to MTB Atlanta President Brett Davidson, it’s those treasured trees that have presented the biggest hurdle in getting singletrack built within city limits.

“As a trail builder, I work with many different land managers including the National Park Service, and when we do trail construction, there are some restrictions, but even they have nothing like the Tree Ordinance here,” said Davidson, referring to the city’s Tree Protection Ordinance. “If we can prove that we can build singletrack in Atlanta with this tree code, we can share that plan with cities like Portland [Oregon] and Austin, which also have tree codes. This will benefit other trail builders across the country.”

Since 1993, the Tree Protection Ordinance has tried to preserve Atlanta’s canopy by requiring city approval and a size-based fee before cutting down any hardwood tree greater than six inches in diameter or pine greater than 12 inches. And while, in general, that ordinance bodes well for Atlanta’s boughs, the tree code can be a costly logistical nightmare for developers of all kinds, even trail builders.

Although metro Atlanta is home to a thriving community of mountain bikers (five chapters of SORBA, the Southern Off-Road Bicycle Association, are in the Atlanta region alone), the opportunities to ride have been exclusively developed in the hilly suburbs of Atlanta, “outside the perimeter” (colloquially known as OTP) of I-285 , which forms a loop around the city. Navigating the city’s tree code was a deterrent to early trail development in the city, said Davidson, but mostly the trails went where the ridership was concentrated and the land was available.

The trails at Georgia International Horse Park east of town were some of the first to be established and served as the site of the first Olympic mountain bike race course in 1996. Later came the Blankets Creek system northwest of Atlanta near Woodstock. The success and popularity of Blankets Creek have since spurred more recent trail projects like the Taylor Randahl Memorial Bike Trails at Old Rope Mill Park (also in Woodstock) and Sope Creek in the Chattahoochee River National Recreation Area near Marietta.

For years, mountain bikers living inside the perimeter (ITP), or within Atlanta city limits, had no problem driving 30 minutes to a trailhead for a seven-mile ride. But within the past decade, Atlanta’s population has exploded. Last year the U.S. Census Bureau found that Atlanta had the third highest population gain of any metro area in the country, with nearly 90,000 people moving to the area between 2016 and 2017. With more people comes more traffic, especially on the I-285 beltway. For mountain bikers ITP, that 30-minute trailhead commute a decade ago can now take an hour one way on a weekday.

But soon, mountain bikers ITP won’t have to drive far to ride on trails. Later this month, Atlanta will open three miles of singletrack at Southside Park, the city’s very first mountain bike trail system. Located two miles outside of Hartsfield-Jackson Atlanta International Airport and just over five miles from downtown Atlanta, Southside Park will eventually be home to nearly seven miles of singletrack with three loops of varying difficulty.

The beginner loop, a 1.25-mile flow trail called the Evergreen Trail, has been officially open since December 2016, but the forthcoming ribbon cutting for the three-mile intermediate loop is a benchmark example of thoughtful development that honors, not impacts, Atlanta’s trees. Not a single tree bigger than 2.5 inches in diameter, which is essentially a sapling, had to be removed for the three-mile trail. The resulting singletrack is tight and twisty, weaving seamlessly through Southside’s dense forest.

“At first, we thought the Southside trails would just be kinda average,” said Daniel Jessee, a mountain biker ITP and outdoor programs and outreach market manager at the REI Atlanta store. “When they actually went back in there and started flagging the corridor, they found so many cool spots with little waterfalls and amazing rock gardens. The Southside trails will be on par with every other trail system in the Atlanta area. Once everybody knows those trails are there and of that quality, I think a lot of people are not going to drive outside of the city to go mountain biking anymore.”

At 211 acres in size, Southside is Atlanta’s second largest city park (the largest is the new 280-acre Westside Park at Bellwood Quarry). With the exception of a few softball fields, some tennis courts and a massive parking lot, Southside has historically been underutilized. Unless a softball or soccer game was on the calendar, the city generally kept Southside’s gates closed.

“It’s like a hidden gem back in there,” said Shirley Nichols, president of the South River Gardens Community Association, which represents the neighborhood adjacent to Southside. “It’s a beautiful park that for years was sitting out there and most of the time, nobody was using it. When you’re out there in the woods, it doesn’t even seem like you’re right in the middle of the city.”

The park’s large undeveloped tracks of wooded rolling terrain made it the perfect venue for Atlanta’s first mountain bike trails. Southside has more tree-covered acreage than any other city park in Atlanta, which might seem unusual given the city’s canopy renown. But, according to Park Pride Executive Director Michael Halicki, protected parks account for only 5 percent of the city’s tree canopy. Private property with single-family homes, on the other hand, make up over 75 percent of Atlanta’s forest.

“There’s this green space paradox where it seems like we have so much nature but so much of that forest is not public land,” Halicki said. “Despite the fact we’re a city in a forest, we’re underparked compared to cities of our size.” 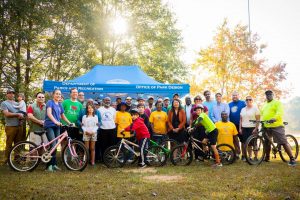 Adhering to the tree code was the highest priority for Davidson, but it’s also been the most expensive. Thus far, the 4.25 miles of constructed trails have totaled $175,000, of which $30,000 was used specifically for tree surveying and impact mitigation. With help from REI (which awarded the project $65,000), Park Pride, the Atlanta Bicycle Coalition, South River Gardens Community Association and a handful of private donors, MTB Atlanta has been able to raise 100 percent of the funding without city dollars or Recreational Trails Program grants.

“It’s really a bottom-up approach,” Halicki said. “In some places, the parks departments are better funded and you get a top-down approach. There are some benefits to that as far as having more resources, but what we see in Atlanta is the creativity of the community, the hard work, the volunteer days. The end result is something that has that ownership built in by a community of enthusiasts who raised the dollars and put in the sweat equity to actually build the trails. I think that makes it a richer experience.”

According to Davidson, the intermediate and advanced trails will, like the Evergreen Trail, be named after trees in honor of Atlanta’s canopy and tree code. Plans are already in the works to connect the Southside trail system into a spiderweb of green spaces, including over 17 miles of singletrack, a bike park, four pump tracks and three skills areas. Davidson’s hope is to utilize Southside not only as a poster child for future trail projects in the city, but also as an outreach basecamp for Atlanta residents to discover mountain biking. MTB Atlanta, with the help of the local REI, has already held beginner mountain bike courses at Southside through the local Boys & Girls Club, and both Davidson and Jessee intend to continue offering those introductory experiences.

“Southside is illustrating a really powerful way that organizations can work together and paint a bigger regional impact picture,” Jessee added. “The success of these trails has the potential to take our car-centric city and turn it into an outdoor recreation hot spot. This could be the spark that lights that fire.”