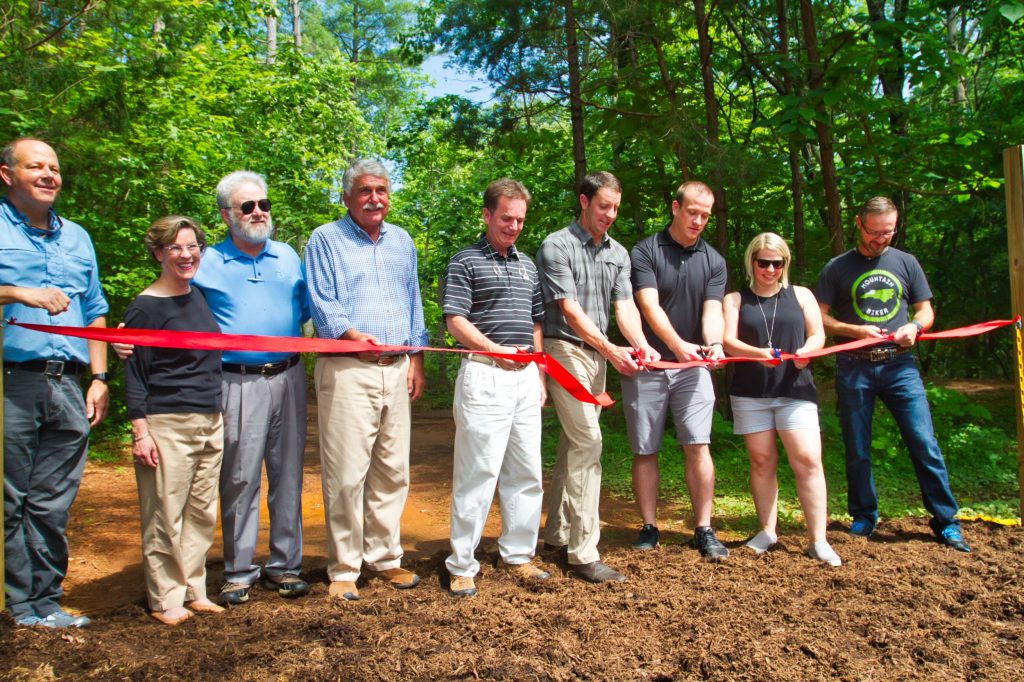 A ribbon cutting ceremony was held on Friday, June 1, to celebrate the grand opening of the recently completed Lake Hickory Trails, a system of mountain biking trails spanning the terrain at Hickory City and Rotary-Geitner Parks.

The Lake Hickory Trails include a 1.8-mile beginner flow trail, a 4-mile intermediate loop, a pump track for both advanced and beginner riders, and an advanced jump line for more skilled riders.

In early 2017, Hickory citizens, Kirk Brittain and Brad Stevens, approached the City, seeking to adopt the trails between Hickory City Park and Rotary-Geitner Park, and spearhead an effort to improve the existing trails so that mountain bikers of all skill levels could enjoy them.  Brittain and Stevens are both members of the Northwest North Carolina Mountain Bike Alliance (The Alliance), a 501(c)(3) chapter of SORBA, the Southern Off Road Bicycle Association. The project and funding were run through The Alliance for its expertise in this arena, and non-profit status.  Brittain and Stevens raised over $100,000 locally from corporations, small businesses, and the public to fund the project.

Hickory Parks and Recreation Director Mack McLeod opened the ceremony and introduced Brittain to the crowd gathered at the beginner loop trailhead.  Brittain shared his excitement for the trails to be open and expressed thanks to the City of Hickory, Hickory City Council, The Alliance, and to Terra Tek Trails, the professional trail contractors who built the Lake Hickory Trails.

Mayor Hank Guess followed Brittain, saying, “It’s all about partnerships, and people getting involved in our community…it’s about looking forward to building our city and making it a better place for the future.  We appreciate the tremendous work and effort that everybody here has put in to make this happen today.”

Additional comments were made by Jack Brown, the President of The Alliance, who expressed interest in hosting future bike rodeos, member meetings, and community events at the Lake Hickory Trails.

Brittain, along with Hickory City Council members, representatives from The Alliance, and Stevens’ wife, Traci, then cut the ribbon to signify the official opening of the Lake Hickory Trails.

For more information about the Lake Hickory Trails, please contact the Hickory Parks and Recreation Department at (828) 322-7046.  For trail status updates, follow the Lake Hickory Trails Facebook page, https://www.facebook.com/LakeHickoryTrails/. To find out more about The Alliance, please go to www.ridenwnctrails.com for details about the work being done in Northwest North Carolina.

There are no upcoming events.