There has been a very successful, and long standing collaboration between the Southern Appalachian Bicycling Association (SABA), the Clay County Communities Revitalization Association (CCCRA) and the Tusquittee Ranger District of the USFS since 2003. The existing 15 miles of trails were completed in 2008, but there has always been a goal of adding more trails, along with other amenities, to the trail system. In 2013, a formal request by SABA was submitted to the Tusquittee Ranger District for the addition of more advanced trails. It took until 2016 for the one mile connector trail to be constructed, which linked the trailhead area to the entrance of the campground. 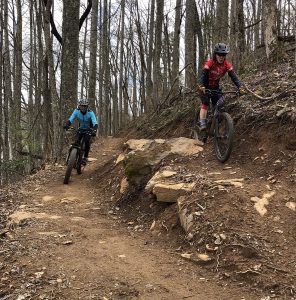 SABA organized a formal meeting with the Tusquittee Ranger District and CCCRA to press for the construction of new trails. CCCRA has always had the role of being the fiscal agent in this venture, having the 501c3 and ability to successfully secure grant funding through a multitude of sources. Rob Tiger and Ron Guggisberg have been members of CCCRA during the entirety of the Jackrabbit project, and share a vision for recreational and heritage tourism. Their passion for the project mirrors those of SABA. The Recreational Trails Program (RTP) grants have been a source for funding, but CCCRA has always been creative in locating other sources that focus on natural heritage and economic tourism. The Conservation Fund has a Creating New Economies Fund (CNEF) that is a Resourceful Communities Small Grant Program. This provides seed money to community based efforts. This grant was secured by CCCRA to pay for the required environmental impact studies (archeological and botany) per USFS guidelines prior to the disturbing of any soil. 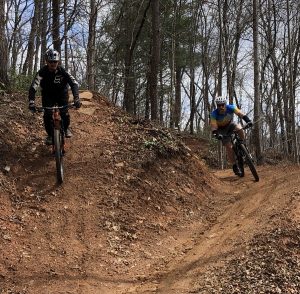 SABA has continued to conduct fundraisers and secure donations to contribute to the fiscal needs of trail maintenance and construction. SABA also continues to work closely with the USFS as a volunteer group to maintain the trails. Joanna Padgett-Atkisson and Fred Lewis have been with SABA since 2002, and were the catalysts that ignited the Jackrabbit trail project. Joanna has served on both SABA and CCCRA organizations since the collaboration formed, which has helped with the communication and continuity between the two groups. She has been the liaison between SABA and the Tusquittee Ranger District as well. It was Joanna’s vision of having more advanced trails to meet the need of all user groups and to create an area that would become a destination trail system. She began walking the site of the proposed new trails on the Jackrabbit Mountain years before construction to develop a ‘feel for the land’. She designed the original flag line, but knew that this trail needed to be constructed by a professional trail builder who could create challenge but also make the rewards worth the effort. Ed Sutton and his crew at Trail Dynamics did just that. He ‘massaged’ the flag line and added the jumps, table tops, banked/bermed turns and rock features while keeping his signature flow. 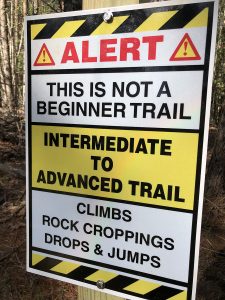 Several trail names were suggested by SABA, but rejected by the USFS (in their words, because those names were too ‘flashy’). So the new trail is officially named Rabbit Ridge, but is affectionately known as Smackass Ridge (after the nearby Smackass Gap) and Jumping Jack Flash. Rabbit Ridge is a directional trail for safety reasons. Bikers and hikers will go opposite directions, and alternate entry to the North or South entrance according to the day of the week. Access to this trail is from the Church Cove Connector trail.

Trail Dynamics is scheduled to return to construct the Rocky Cove trail in early-mid summer. This will be a short (&lt; 0.5 miles) trail that will extend off of Rabbit Ridge on a fingertip peninsula. The goal of this trail will be to have an exciting alternate loop that provides a unique experience and will stand in contrast to the main loop. It will be designed and built to provide technical dirt and rock features and be of varied skill levels with opt-arounds. In other words, a short ‘play’ area that will encourage riders to advance skills at their own pace. A more formal ‘opening’ will be planned at the completion of this trail.

SABA and CCCRA purchased a bike wash station, and the Tusquittee Ranger District will install this at the trailhead in the near future. There is also a vision of constructing a covered pavilion. The success of this project has been having the handful of very passionate individuals who have a vision, have a lot of patience and respect everyone’s individual talents for what they do best.