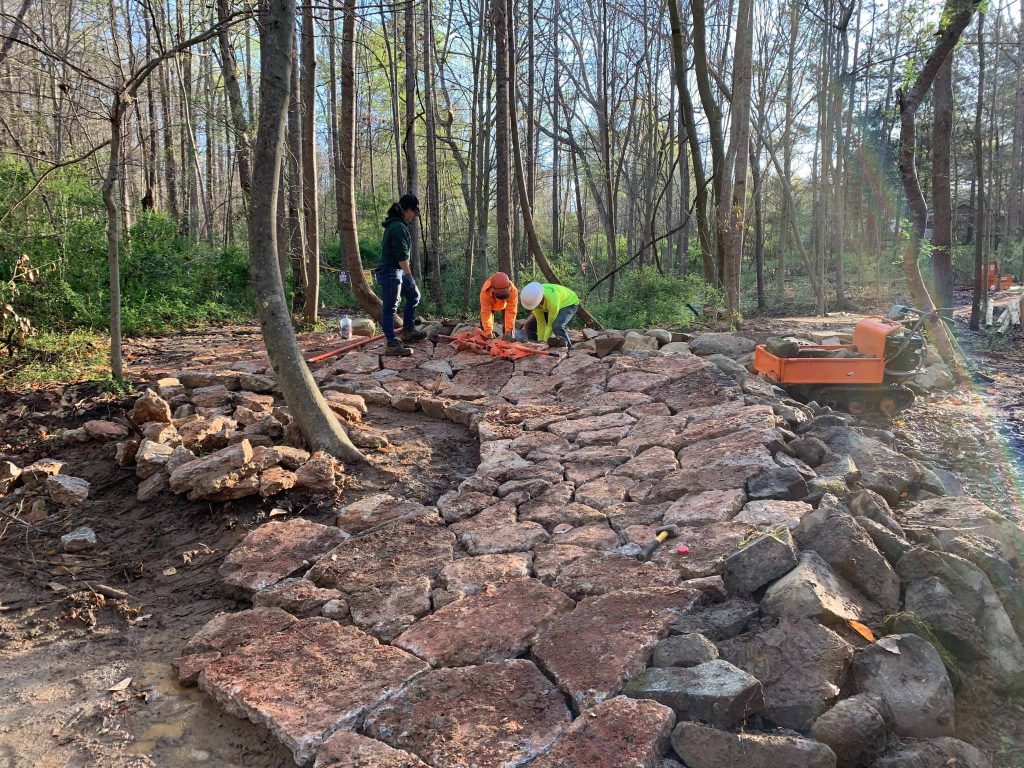 Thanks to the efforts of the Tarheel Trailblazers, Rocky Branch Park in Belmont, NC is re-opening on August 7 after undergoing upgrades to make it a must-see outdoor attraction for visitors to Gaston County. When completed, this park will offer an extensive trail system for hikers and mountain bikers of all skill levels providing easy, moderate and challenging trails. This unique park is a multi-municipal park, the first of its kind in Gaston County. The trails connect two towns, the City of Belmont and the Town of Cramerton making it convenient for adventurists to make a day of enjoying the park followed by time in each of these downtowns.

​​Rocky Branch Bike Park was originally developed in 2012 as a partnership between Belmont City Council, Belmont Police Department, South Main Cycles, Piedmont Area Singletrack Alliance and community volunteers, as a Belmont Police Department outreach project.  In May 2012, Officer Douglas Huffstetler and a group of volunteers led the initial construction effort by creating the first trails and bridges in the park.

In 2016, SORBA chapter and non-profit trail advocate, the Tarheel Trailblazers, signed an agreement with the City of Belmont to maintain and develop the trails at Rocky Branch Park, appointing Bruce Euler as the Trail Coordinator.  Bruce led a team of community and Tarheel Trailblazer volunteers to construct an additional four miles of trails and features.

In December 2018, the Tarheel Trailblazers executive board appointed a group of community members to serve on the newly-formed Rocky Branch Park Committee. The Committee’s charge was to create an inclusive, progressive trail system connecting Belmont to Cramerton. Facilitated by partnerships with the City of Belmont, Town of Cramerton, Carolina Thread Trail, Gaston County Parks and Recreation, and Gaston County Schools, the Committee engaged Community Trail Design to develop a master plan for the park that was adopted by Belmont City Council in October 2019.

“It has been amazing to see the collaboration between the community, multiple organizations and government entities. The Tarheel Trailblazers had overwhelming support from the City of Belmont, the Town of Cramerton, the Carolina Thread Trail, and Gaston County Schools. Without everyone working together and the community volunteers stepping up, we couldn’t have made this project possible.” Dave Baker, Belmont resident and Rocky Branch Park Committee Chairman.

“When the enhancement concept was introduced, it was considered a large and ambitious project to be led by a team of community volunteers. The team’s dedication to communicating the vision and future benefit to the region resulted in strong community and corporate donor investment. Paired with municipal support, we’re building a park and trail system beyond what either group could have completed alone.” Sarah Kaufmann, Belmont resident and Rocky Branch Park Committee Fundraising Lead. 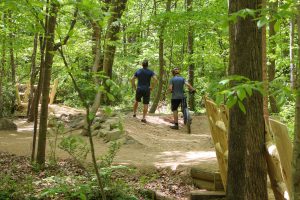 Re-opening August 7th is the first phase of the enhancement which includes a new segment of the Carolina Thread Trail, a 1 mile multi-use crushed gravel trail running through the park with five bridges crossing the Rocky Branch Creek.  Intersecting the multi-use trail is a new 1.15 mile beginner level trail loop named “Canopy” for its full foliage and tree cover. It boasts bike-skills features such as rock gardens, boardwalks, dirt rollers and berms. The construction incorporated nearly 3,000 cu ft of recycled concrete keeping it out of the landfill and creating a more weather-resistant trail. The legacy trails “Euler’s Way” and “Legacy” have also been enhanced and incorporated into the phase providing four miles of available trail. Greeting visitors at the main entrance is an Instagram-able six foot tall rock cairn flanked by new kiosks built by Jake Thovtrop as his Eagle Scout project.

Future phases include a 1.35 mile intermediate trail loop named “Boulder” for the over 150 tons of imported thick stack fieldstone rock incorporated into the trail and features. Construction is currently in progress and estimated to be completed in Fall 2021. Fundraising is underway for the final phase of the project which will construct a 1.10 mile advanced trail loop (for mountain biking only). The progressive trails will include natural-element bike park style features such as rock gardens, boardwalks and dirt drops. This creates the region’s most unique urban trail systems for bikers, hikers, and outdoor enthusiasts to enjoy.

“The team of volunteers that formed the Rocky Branch Park Committee has been an absolute honor to work with. Thousands of volunteer hours have been spent in planning, design, fundraising and construction support. Each of the members worked together leveraging their individual talents to make this project a success. I hope their work serves as a model for other community groups.” Dave Baker.