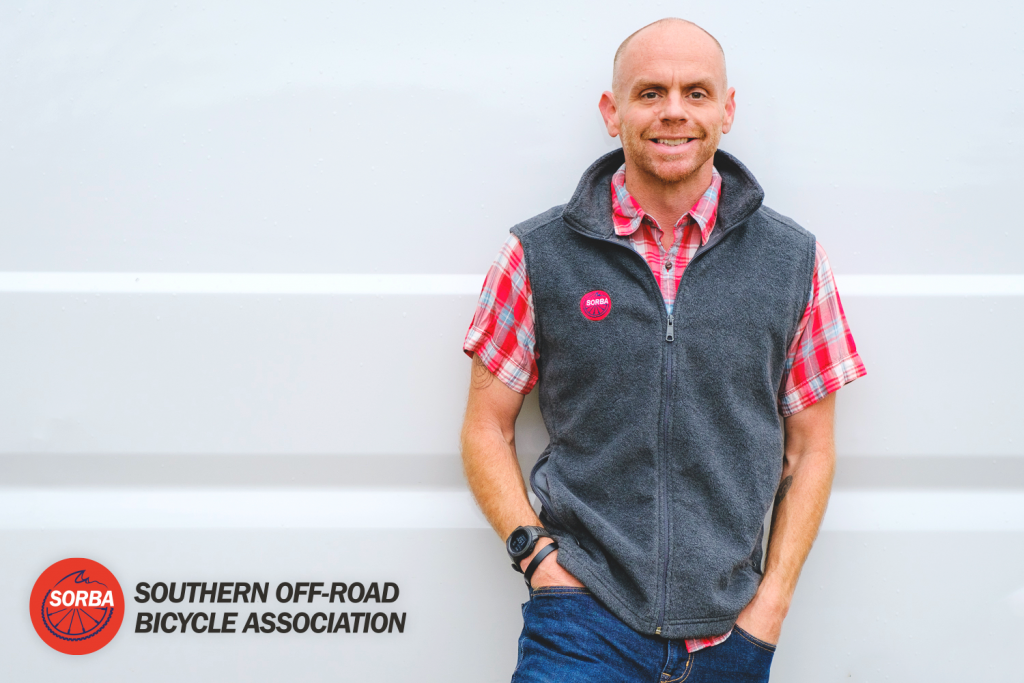 At the Fall Board of Directors Meeting, the SORBA Executive Board unanimously elected current Associate Director, Philip Darden, to be the new Executive Director beginning January 1, 2023. This decision comes after current Executive Director, Terry Palmeri, announced her retirement earlier this year. Following is a statement from Philip in response to his new promotion.

To say I am excited for the opportunity to be the next Executive Director of SORBA is an understatement. One of my passions is helping to develop healthy, active communities that responsibly utilize their natural resources. And now as Executive Director, I get to continue sharing that passion across the southeast. But to begin, for those who may not know, I feel I should say a little about who I am and where I come from.

I’m a lover of all things outdoors. Mountain biking, running, hiking, camping, snowboarding, paddling, photography, you name it I’ll give it a go! I believe the woods, no matter how small, can have a huge impact on a community and the individuals that reside there. Spending just a few minutes of your day surrounded by trees, wildlife, dirt, and water can be transformative.

I grew up a product of two worlds, a kid from the Atlanta suburbs who spent a considerable amount of time exploring my family’s property just outside the Talladega National Forest in Oxford, Alabama. The woods always felt like home. My first mountain biking experiences were spent as a teenager exploring the trails around Gwinnett in the late 90’s on my fully rigid Trek 800. My friend Charlie and I had no idea what we were doing but man was it fun! It was then I was first introduced to SORBA. Keith McFadden is the father of one of my high school friends and one day he took me to ride the recently opened trails at Blankets Creek. At the time I had no idea what SORBA was, how trails were made but I loved to get out and ride!

Fast forward a number of years, I was burned out on racing, and found myself volunteering to build trail at Chewacla State Park in Auburn, Al. At the time we were a relatively unorganized and uneducated group with no real guidance to speak of. That all came to a head when we were fortunate enough to have the IMBA Trail Care Crew (in my opinion the best program IMBA has done to date) come by and show us the ropes. From there we began the process of becoming a SORBA chapter, and when it came time for someone to volunteer as Vice President I raised my hand. Who knew that seemingly insignificant decision at the time would lead me here today.

Thank you again for the opportunity. I don’t promise to know everything, but I will work hard and we will figure it out together. I am grateful for the resources of Terry and Tom. Their knowledge of trail advocacy is invaluable and part of the legacy of what makes SORBA great! I will continue their work in supporting our chapters so that they can be as effective as possible. My goal is to provide as many opportunities as possible for our volunteers to learn, empowering them to make positive impacts to their community. To help develop trail systems that are just as diverse in experiences as the users who enjoy them. To bring mountain biking and the outdoors to all walks of life, regardless of background. I look forward to having you join in the adventure!

See you on the trails!